Have you ever wondered what would happen if a drone brand like Drona Aviation was to partner with a massive international fast-food conglomerate such as Kentucky Fried Chicken? Well, 2018 saw the result of this kind of merger with the Kentucky Flying Object (KFO) drone. Facilitated by Blink Digital and the brilliant marketing slogan of ‘The most fly meal ever’, KFC had gotten precisely what they wanted: a DIY drone that every loyal customer could create from their chicken wing box. While there was never any doubt as to the flyability of the drone, due to its design concept being based on Drona Aviation’s already successful and familiar Pluto drone, the consumer response was overwhelming.

What is the KFO Drone?

The KFO drone was the brainchild of Kentucky Fried Chicken and Blink Digital. Together, they came up with a brilliant incentive for people to buy the infamous KFC chicken boxes. To commemorate KFC’s new smoky grilled wings, the limited-edition box packaging, for 24 lucky customers, can be easily converted into a drone. Designed in the classic KFC colours of red and black, the Pluto-inspired Drona Aviation drone can be assembled with instructions that are available online. The drone is controlled by your Smartphone over WiFi connection. 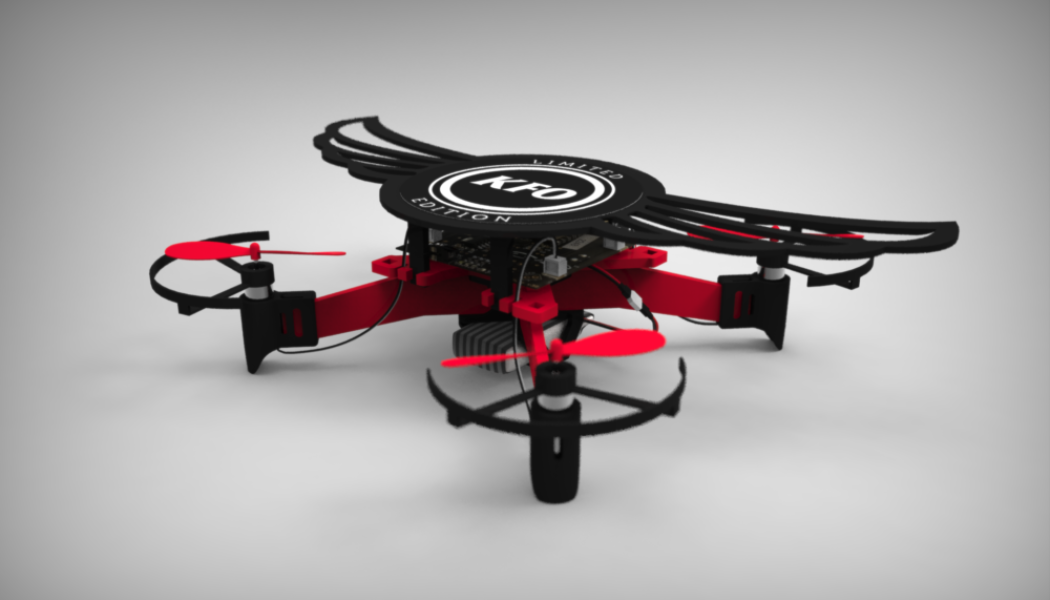 Where Can I Get the KFO Drone?

To get the KFO drone, you might have the daunting task of eating a lot of your favourite chicken wings. Launched in KFC’s Indian locations, the KFC chicken wing box contains everything needed to turn the box into a drone. To get yourself a KFO, visit one of the KFC locations throughout India between January 25th and 26th, purchase yourself some tasty chicken wings, and hope your box is one of the good ones. After the launch of the purchase drones, you can visit the KFC website and order one for yourself that way. The Indian KFC locations known to have the drones are in Bangalore, Delhi, Gurgaeon, Chennai, Hyderabad, Mumbai, Kochi and Via.

How Do I Assemble the KFO?

Everything needed to assemble the KFO is in, and part of, the chicken wing packaging. The first step is punching out the drone parts from the box and looking up and following the instructions online. Next, you simply download the app to control your quadcopter drone.

Facts About the KFO Drone and Features

Drona Aviation created a classic quadcopter drone ideal for flying indoors and outdoors. In the stylish KFC colours of black and red, the guts of the drone is Drona Aviation’s renowned PrimusX Flight controller and the Pluto platform.

The project included designing an app for the KFO that was not specifically related to the PlutoX, so its own controller was created. The new KFO controller effectively controls the drone with steady and precise movement, stabilizers, and simple steering mechanisms. For a potentially free drone, the Kentucky Flying Object offers users the pleasure of a simple drone flying experience, not to mention being part of a coveted unique techie marketing strategy of unparalleled ingenuity.

The Kentucky Flying Object in the News

While the hope for the KFO’s flyability was strong, the appeal and reaction to the drone was something unanticipated. After the story was picked up by numerous social media sites and news sources, KFC’s latest marketing campaign was an instant hit. The story was picked up by The Verge, Engadget, and the Hindustan Times. Social media gurus and influencers like Mumbai Foodie and iGyaan featured the new and impressive drone on their profiles, introducing it to their built-in follower base. The KFO marketing team also took their campaign and product to foreign YouTubers, such as Techsmartt, to further spread their campaign.

Kentucky Fried Chicken is known for their unique and ingenious marketing campaigns, and they are no strangers to joining techie products with their tasty chicken. Originally used as military gadgets to gather surveillance in intel operations, drones have evolved as a form of mainstream entertainment for children and adults alike. With drone technology constantly evolving and becoming less expensive and more accessible to the public, companies like KFC saw the merits of partnering with a marketing agency like Blink Media who saw the potential in using the popular drone platform as an advertising and promotional platform. The classic quadcopter drone features a specified controller, simple controls for flyability indoors and outdoors. The promotion also capitalized on the DIY revolution that has gripped the public as more and more people are interested in making their own gadgets. For those fortunate enough to experience the KFO, the control and flying experience is as memorable as its marketing platform.